To celebrate the Ninth Doctor’s anniversary, Big Finish gives us the first audio preview of The Ninth Doctor Adventures: The Ravagers.
“So, you lied to her.”
“I meant what I said.”
Posted by Craig Oxbrow at 19:01 No comments:

Email ThisBlogThis!Share to TwitterShare to FacebookShare to Pinterest
Labels: adventures, doctor who

The new era of Doctor Who began sixteen years ago tonight. It’s been back longer than it was away. I talked about how that felt six years ago here.
Posted by Craig Oxbrow at 19:00 No comments:

Email ThisBlogThis!Share to TwitterShare to FacebookShare to Pinterest
Labels: doctor who, episodes, history

The 90s comics Doctor that never quite was

Via Vworp Vworp! -
In 1997 Matt Bookman came up with a proposal for a BBC SF magazine with Doctor Who, Red Dwarf and more comics, called The Sci-Files and then Robot. It got as far as a dummy issue, with a new Doctor design.
The look is very “character actor in a mismatched historical costume” as DIY Doctors often are. The likeness started out (to me) looking quite Christopher Plummer, and then a bit Alan Rickman, and ended up kind of a blond Peter Wyngarde without the moustache. 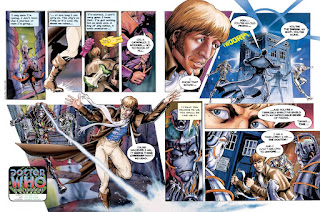 And I like that opening. “I only know I’m running. I don’t know when I started, or where I’m going...” Of course it starts with running.
Posted by Craig Oxbrow at 21:34 No comments:

Email ThisBlogThis!Share to TwitterShare to FacebookShare to Pinterest
Labels: comics, doctor who, history, the doctor

Celebrate World Book Day! The kid-centric one, not World Book Night.
Posted by Craig Oxbrow at 09:45 No comments: